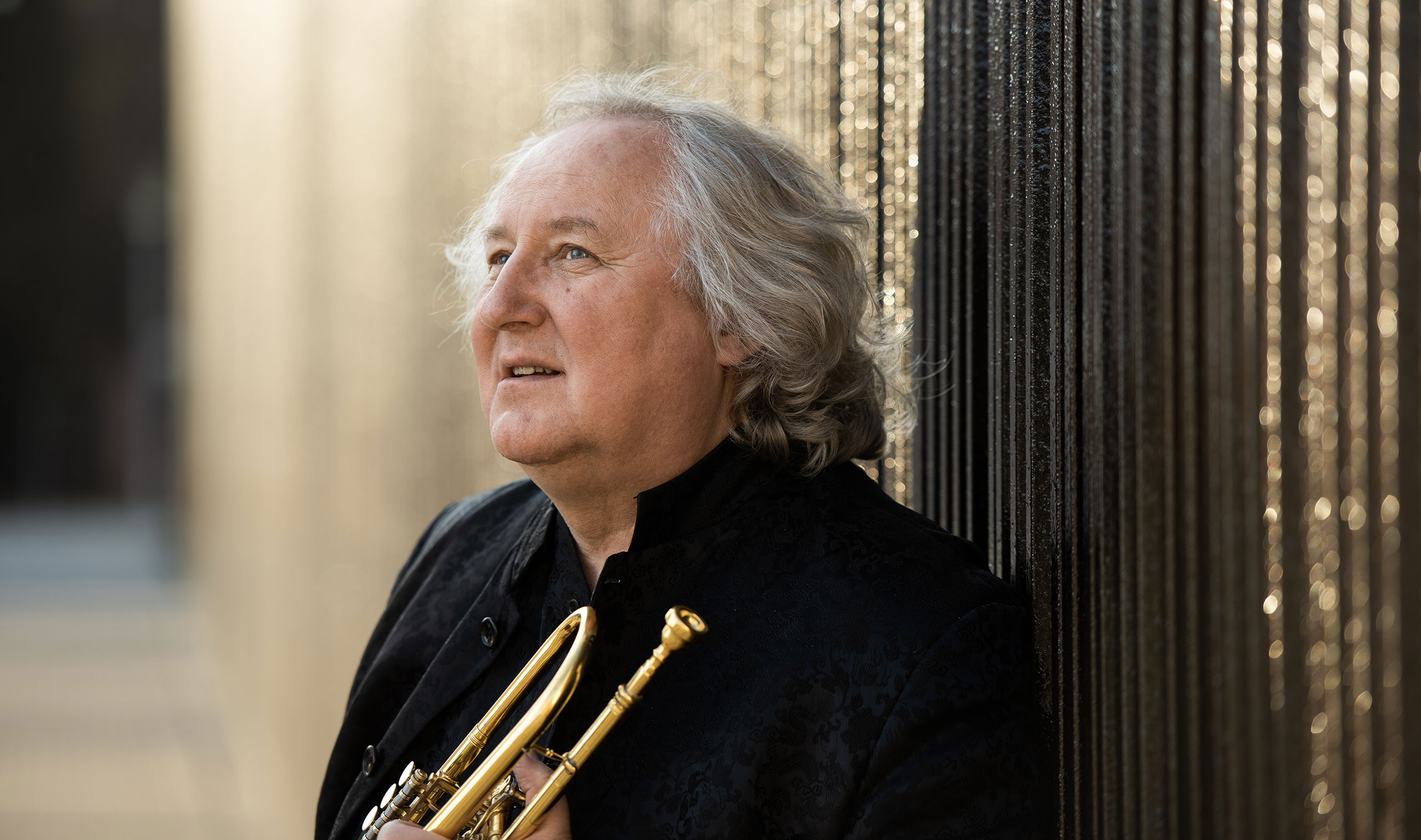 Since his success at the ARD Competition in 1986, Reinhold Friedrich, born in Weingarten/Baden, has been playing on the world’s most famous stages. His debut at the Berlin Festival 1982 with „Sequenza X“ by Luciano Berio and his debut at Vienna Musikvereinsaal in 1994 with the Trumpet Concerto by Joseph Haydn, played on the historical keyed trumpet, show the wide spectrum of his activities. In 2003, Claudio Abbado (†) appointed Reinhold Friedrich the permanent principal trumpet of the Lucerne Festival Orchestra. He is also artistic director of the Lucerne Festival Orchestra’s Brass Ensemble.

For Reinhold Friedrich, early music and new music belong together – without contradicting each other. He has performed on period instruments with Capriccio Basel, the Orchestre des Champs-Élysées and the Vienna Academy. Equally, he has premiered many contemporary works by Wolfgang Rihm, Sir Peter Maxwell Davies, Carola Bauckholt, Hans Werner Henze, Adriana Hölszky, Nicolaus A. Huber, Rebecca Saunders and Caspar Johannes Walter. Solo concerts such as “Eirene” by Herbert Willi (Wergo) and “Nobody knows de trouble I see” by Bernd Alois Zimmermann, whose CD recording won an ECHO Klassik in 1994, form a vital part of his broad repertoire.

The duo Reinhold Friedrich & Eriko Takezawa inspires with new, innovative programs as masterpieces for trumpet and piano of all epochs are formed into colourful bouquets. New music by contemporary avant-garde composers appears next to the classics of the repertoire. Alongside compositions by György Ligeti and Toshio Hosokawa, works by Georg Philipp Telemann, Johann Sebastian Bach and Girolamo Fantini make an appearance in their Baroque splendor.

They also present intelligent arrangements, such as the newly composed sonata after Richard Strauss or the “Blumine” by Gustav Mahler for trumpet & piano, “Rhapsody in Blue” by George Gershwin or “In the Style of Albeniz” by Rodion Shchedrin. Music of the French and Belgian composers of the Fin Siecle is also featured.

But we also hear new pieces written specifically for this melodious combination of instruments! With classics such as the sonatas of Paul Hindemith, Sir Peter Maxwell Davies and George Antheil, the duo’s focus lies on the current repertoire. They also frequently commission young composers such as Nina Senk (1982), Katrin A. Denner (1986) and Franz Ferdinand August Rieks (1998) to write new pieces.

Eriko Takezawa’s first class piano solos enrich the program ranging from Johann Sebastian Bach to Claude Debussy to Toru Takemitsu and Wolfgang Rihm and, in the case of Reinhold Friedrich, from Luciano Berio’s Sequenza or the Sonatine by Hans Werner Henze. 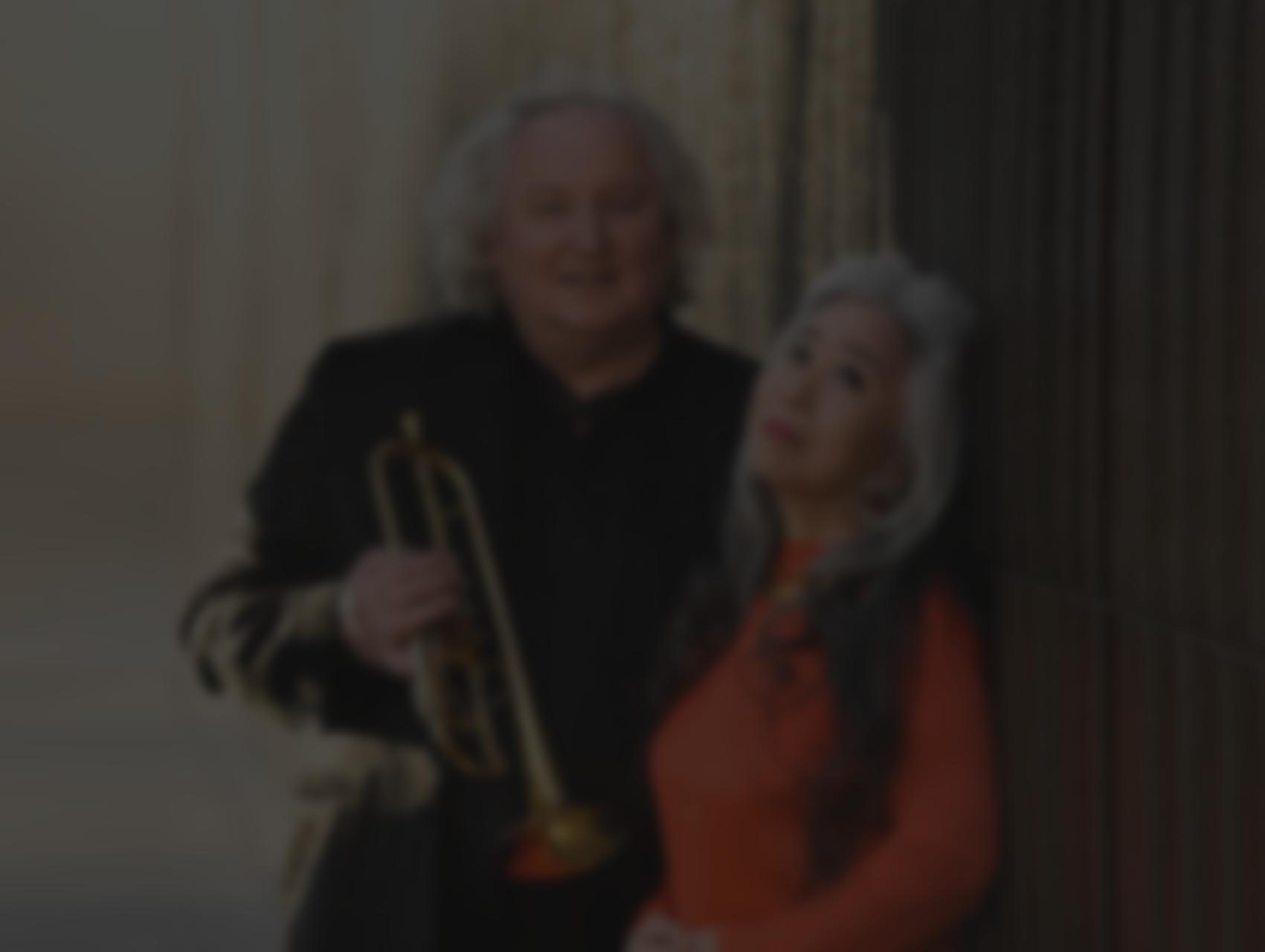 … This CD is a real treasure chest….The Concertino by Joseph Jongen, composed in 1913, and the Sonata by Karl Pills, composed twenty years later, are played by the Friedrich-Takezawa duo with sophistication, style, and eminent musicianship.

Trumpet with Chamber Orchestra (strings only)

Trumpet with Chamber Orchestra and other Solo Instruments 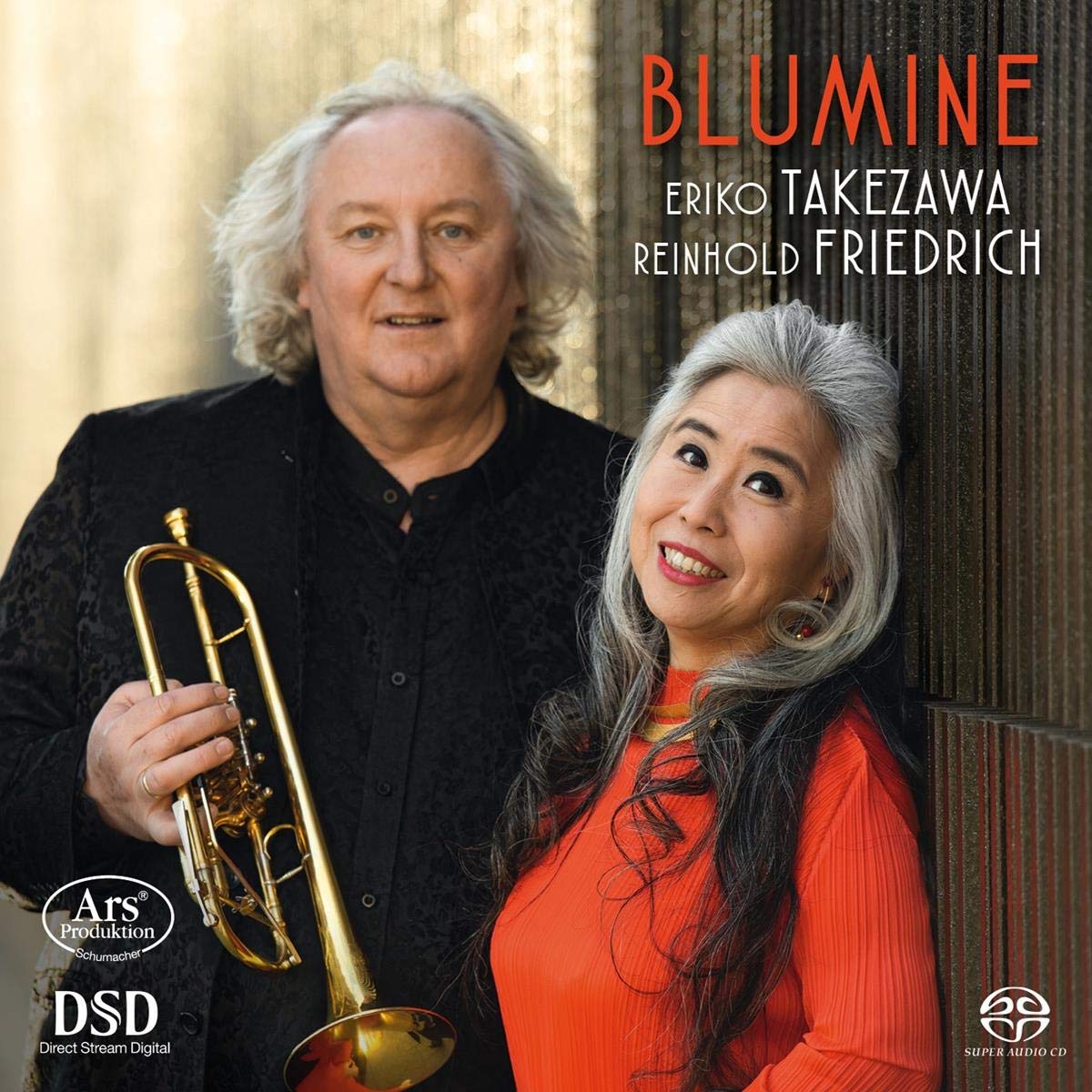 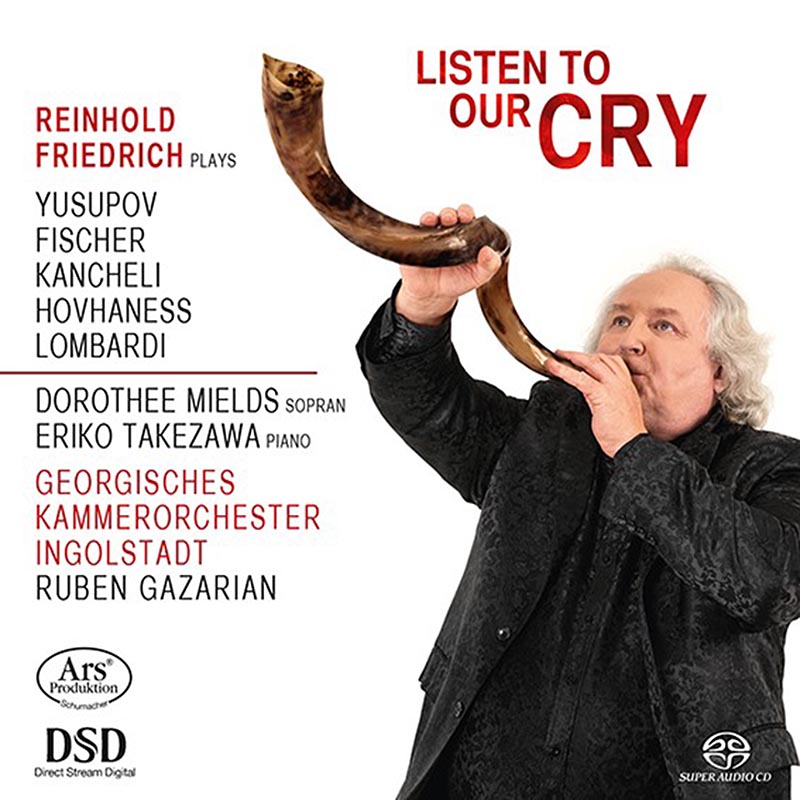 Listen to Our Cry 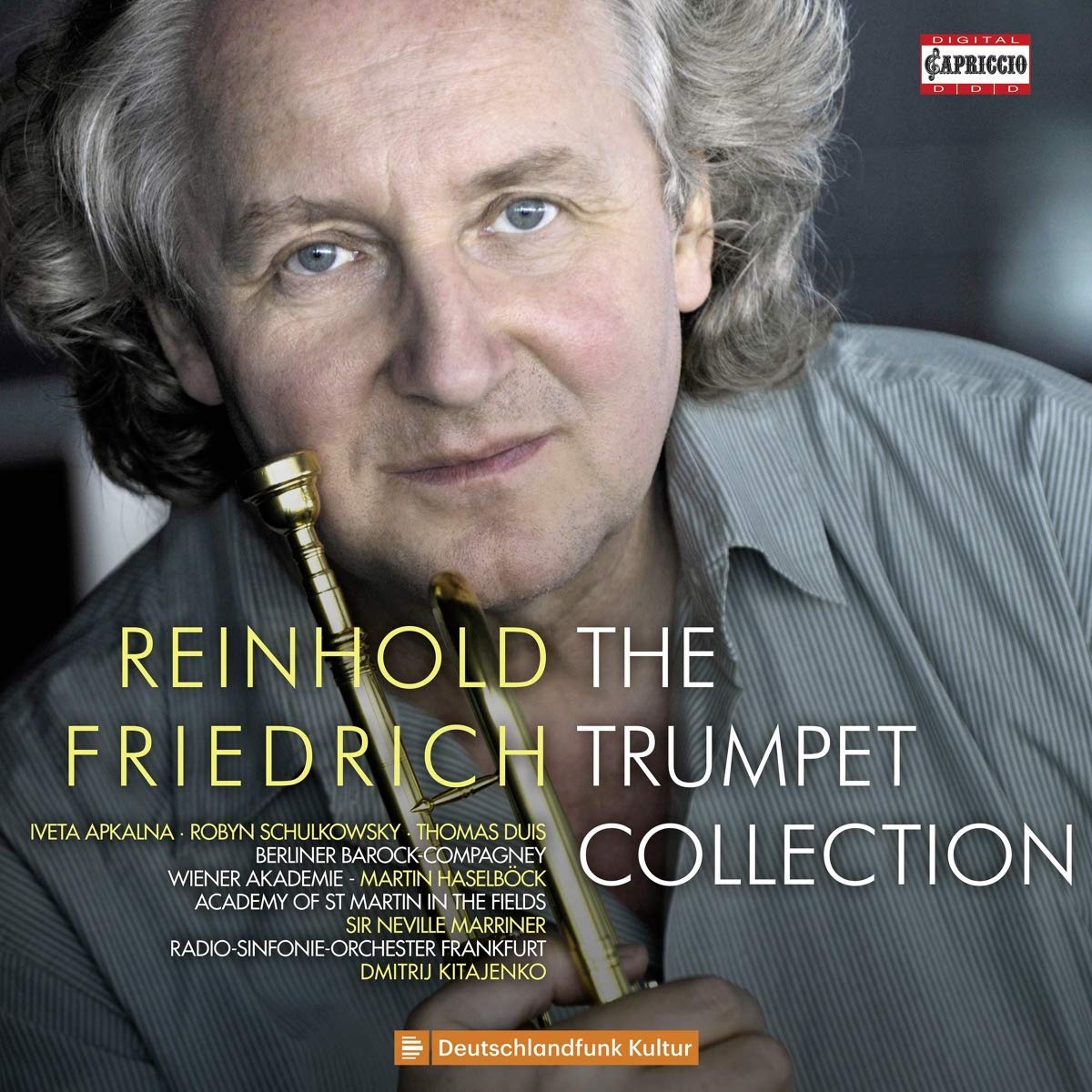